.
Overall Satisfactionc85
This is without a doubt the best file manager for Android Tablets.
Please make updates for android KitKat.
Absolutely the best file manager for tablet ATM.
Better than Astro and ES as those are not optimal for.
Absolutely brilliant so much better than the stock manager.
I love the bookmarks and storage analysis features.
HD quality.
Fun & Engagingc91
Awesome File Management App.
Realy an awesome FILE ex.
Usefulnessc93
Almost everything ASTRO used to be.
Very useful indeed.
Does everything I need and more.
Good app for every day file management.
Best file explorer for every day use.
Simple yet useful.
Production Valuesc50
Simple user interface with all of the functions I need.
its nice and simple user interface always attracts me.
Ease of Usec72
Simple user interface with all of the functions I need.
It is very easy to use and gives all functions.
The simple and does its job clearly and good.
Make my life easy.
Reliabilityc48
Ads not Intrusivec29
need to remove ad on bottom.
Security & Privacyc41
Like hide list with password protection.
simple optional password protection.
Updates & Supportc48
now i have the tablet version.
Excellent customer service too.
I also have the same file mgr for my phone. found in 8 reviews
Otherwise it is the best tablet file manager app out there. found in 13 reviews
Best file manager on the Market for Honeycomb Tablets. found in 3 reviews
Absolutely the best file manager for tablet ATM. found in 14 reviews
but probably not enough to deal with ads - I hate ads. found in 5 reviews
Very annoying ads which are hard to remove just started. found in 6 reviews
there is no remove ad /donation option under settings menu. found in 55 reviews
Good App but creating new folders is hit and miss. found in 4 reviews
Explores fine but cant unzip. found in 2 reviews
But the image viewer is slow when open pictures from SMB. found in 3 reviews
Missing one star for that. found in 4 reviews
Beware Ads disguised as files. found in 3 reviews
Cannot rename or copy files to the ext SD card. found in 23 reviews
" Operation Failed " Galaxy Tab 2 running 4. found in 5 reviews
Cannot open files in other viewers. found in 9 reviews
Plz remove ads and improve your logo. found in 4 reviews
but the only thing missing is changing file permissions. found in 2 reviews
The new GUI is worst than old version. found in 3 reviews
How about a paid version without ads. found in 4 reviews
I regularly get errors while trying to open zip files. found in 24 reviews
Also the build in image viewer does not support animated gif. found in 3 reviews
when I couldnt get ES file explorer to connect. found in 12 reviews
Can no longer set the startup folder to a SMB share. found in 7 reviews
Cant able to copy file on sd card. found in 15 reviews
but can't create folders or move files to it. found in 31 reviews
Why did I have to donate if there are ads. found in 14 reviews
Unable to save to external storage in Android 4. found in 13 reviews
I have paid to remove ads but they are appearing in latest update. found in 55 reviews
I can not copy/move/ delete files from/to SD card. found in 39 reviews
Doesn't write to SD card though ES File Explorer works fine. found in 45 reviews
I am fully willing to pay for an app without ads. found in 16 reviews
After update I am unable to move or copy files. found in 35 reviews
but I see no choice but to delete from my tablet. found in 21 reviews
Unfortunately cannot see an insert SD card. found in 165 reviews
Latest update forces built in image viewer use. found in 16 reviews
but with the new inability to open images outside of this app. found in 24 reviews
Was fantastic until unwanted and intrusive new file notifications appeared. found in 27 reviews
The File Manager HD (Tablet) is now available as a free download on Google Play for Android owners. The application is supporting English language. It weighs in at only 10MB to download. It is highly advisable to have the latest app version installed so that you don`t miss out on the fresh new features and improvements. The current app version 1.11.5 has been released on 2014-11-27. The Apple Store includes a very useful feature that will check if your device and iOS version are both compatible with the app. Most iPhone and iPad are compatible. Here is the app`s compatibility information: 3.0 and up 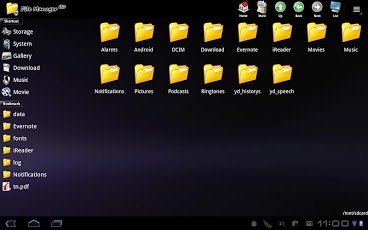 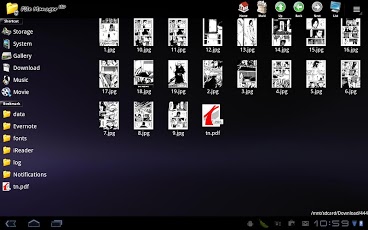 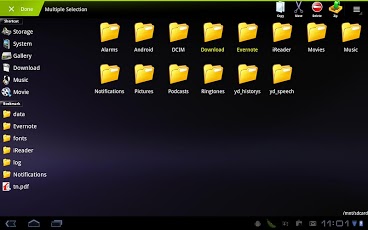 This app is popular with:
advanced usersdevelopersroot users