Tinder , brings Tinder with a number of new features along with the usual bug fixes. Tinder apps has been update to version 2.2.0 with several major changes and improvements. Apps release that improves performance, provides several new options.
HIGHLIGHTS

.
Overall Satisfactionc58
I met the love of my life on tinder and we are the perfect match.
and due to its glitchy interface it really needs an undo button.
Super hot cuties far better than pof.
Fun & Engagingc81
Super fun way to meet new and interesting people.
A very addictive fun way to be introduced to people.
Met heaps of awesome people In my home town and overseas.
Beats wasting time on Facebook.
Needs more people on it.
Fun and exciting way to meet people around you.
Great App for when you're bored or without something to do.
Fun little app that lets you meet new people.
Social Aspectsc65
Good way to meet new people especially stuck in the middle of nowhere.
Good way to meet spam bots.
IT IS STILL FINDING PEOPLE IN MY area after twenty thirty minutes.
Awesome social media app for finding that special someone.
Authors say it is a social networking /friend making site.
Ease of Usec37
Widen your social circle easily with this simple app.
Simple app that seems to work as advertised.
I am amazed at how buggy this simple app is.
Reliabilityc32
Would like to be able to update quotes/info ect.
Had to reinstall as there is a bug for android phones.
buggy at times but better than most others.
Security & Privacyc10
Must have FB account.
but that might be something to do with their privacy settings.
Updates & Supportc18
The customer service was really great too.
Excellent app and customer service.
This app has improved considerably from its original android version.
Android version is out of date with the features advertised.
Batteryc40
I've just a doubt about the battery usage.
Cool site even doe it is old as your granny lmao. found in 13 reviews
It has been a great way to make friends and have fun. found in 33 reviews
However it was a nice time waster. found in 34 reviews
New to it so still figuring it out. found in 11 reviews
Super fun way to meet new and interesting people. found in 27 reviews
Super hot cuties far better than pof. found in 26 reviews
Can't upload pictures from phone gallery when connected by fb. found in 230 reviews
still cannot upload new photos after the update. found in 221 reviews
Unfortunately the compulsory sign in with Facebook is a deal breaker. found in 294 reviews
Way to many fake accounts that send links to porn webcam sites. found in 200 reviews
Can't add photos after initial profile set up. found in 133 reviews
I enjoy the app but find i can't add new pictures. found in 130 reviews
Great app idea but useless if I can't add new pics. found in 64 reviews
Can't add pictures constantly crashing too. found in 148 reviews
I can't add new photos from Facebook to my profile. found in 143 reviews
Can't change notification sound or upload new pics. found in 165 reviews
Its let me change my profile picture now bout time. found in 146 reviews
It won't let me update my profile pictures. found in 300 reviews
Can't upload new pics to your existent profile. found in 64 reviews
I can't upload new pictures after downloading the updated version. found in 130 reviews
Cant upload any pics or change the profile pic. found in 72 reviews
I can't upload photos from my phone gallery. found in 249 reviews
Won't let me upload new pictures after multiple troubleshooting attempts. found in 217 reviews
It also sucks that I cant upload pics from my phone. found in 96 reviews
could load photos bit faster but otherwise seems good. found in 113 reviews
I cannot see mutual friends and shared interests even after update. found in 154 reviews
Nice app if you want to talk with bot. found in 172 reviews
It only displays " finding people near you" help would be appreciated. found in 638 reviews
I can't verify my phone number and can't connect to fb. found in 194 reviews
It's not a dating site its just another hookup site. found in 179 reviews
Can't find anyone and update hasn't changed anything. found in 169 reviews
Wouldn't let me add new profile pictures from Facebook. found in 300 reviews
I got failed to update profile error wheb trying to select gender. found in 177 reviews
There are way too many fake profiles and spambots now. found in 315 reviews
Can't even upload photos nor load from Facebook. found in 249 reviews
Verification code will not send to my phone. found in 253 reviews
Phone verification is completely broken for many users. found in 165 reviews
I cannot upload pictures and it requires my Facebook. found in 230 reviews
no matches and suddenly it cant find anyone anymore. found in 169 reviews
It won't let me upload new pictures from Facebook. found in 217 reviews
Won't download because you have to connect to Facebook. found in 324 reviews
I don't have the new undo button or location button. found in 179 reviews
Problem getting code message keeps popping up. found in 182 reviews
i have tried everything but i cant upload new photos. found in 221 reviews
If you are Android owner,you now can download Tinder for free from Google Play. The application is designed for use in English language. It weighs in at only 10MB to download. The new Tinder app version 2.2.0 has been updated on 2014-02-5. The Apple Store includes a very useful feature that will check if your device and iOS version are both compatible with the app. Most iPhone and iPad are compatible. Here is the app`s compatibility information: 2.2 and up
Bottom Line: For more information about Tinder check developer Tinder`s website : http://www.gotinder.com

Tinder finds out who likes you nearby and connects you with them if you`re also interested. It`s the new way to meet people around you. 1) Tinder shows you someone nearby it thinks you should ... 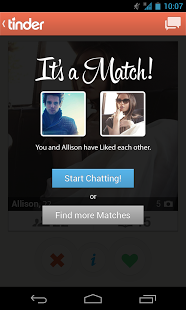 This app is popular with:
singlesguys