.
Overall Satisfactionc63
Big thanks Google for adding support for levels higher than twenty.
Better than Apple game center.
Much better than ios.
Awesome and I recommend to android game lovers.
One of the best online gaming experience in android device.
Fun & Engagingc78
awesome games for ever good game good luck.
This has awesome games.
Just a addictive game.
Nice addictive game.
Wow awesome.
Usefulnessc54
Google play make everything easier.
Made everything easier.
Repeat Valuec90
We people need more levels.
Give more levels up to 50.
Social Aspectsc62
It is nice to play multiplayer games with others and much more.
Doesn't work as a multiplayer game client.
Rock always finding something fun to play with friends.
I cant play with friends and get friends this sucks.
Can compete with friends and I know what they are playing.
and add the social aspect into mobile gaming.
U can see your friends' level & also compare head to head scores.
Good online multiplayer platform.
pretty and the social features are great.
Reliabilityc30
Security & Privacyc36
This is basically an Google Plus for your android games.
as everyday I was receiving notification to change my password.
Updates & Supportc35
For an old version bye arsehole.
its always says update to latest version.
Batteryc32
DHS Texas Hold em. found in 3 reviews
Thank you for the opportunity to compete everyone Google Play. found in 16 reviews
Yo Yo Honey Singh. found in 4 reviews
Also wizard of oz. found in 3 reviews
Like Zombie Tsunami Candy Crush Saga Subway Surfers. found in 7 reviews
And it makes it easy to play online multi player. found in 10 reviews
Makes every game more competitive with achievements and leaderboard stats. found in 3 reviews
I love this app because I find cool games hehehehe. found in 9 reviews
Got addicted to mobile games thanks to this achievement system. found in 10 reviews
Great selection of games needs more beeline games and cooking games. found in 3 reviews
Game rock n roll hu hunny. found in 1 reviews
Great thanks for raising lvl cap. found in 6 reviews
Just a addictive game. found in 3 reviews
my talking tom has more fun games. found in 3 reviews
Do this in app swipbin this order up up down down left right left right. found in 7 reviews
Gaming is much more enjoyable with this. found in 2 reviews
Universal gaming profile that allows you to unlock achievements. found in 5 reviews
Nice that you can play with other players. found in 3 reviews
Keep trying to download games but it says insufficient space. found in 9 reviews
It crashes whenever I try to log in. found in 23 reviews
Have it set to login on all my games. found in 35 reviews
Keep getting "failure to connect to google play services" error now. found in 7 reviews
and then you must install new version google play service. found in 7 reviews
Google please install a feature for gaming saving progress. found in 7 reviews
Going to uninstall if someone doesn't fix it. found in 86 reviews
I cant connect with respawnables game which i play a lot. found in 16 reviews
Doesn't list my installed games if I don't have mobile service. found in 30 reviews
cant see the size of the app before downloading anymore. found in 7 reviews
Downloaded update cant play underworld empire now please fix your updates. found in 22 reviews
I can open game normal day but on this app. found in 4 reviews
Google needs to merge Google+ and Play Games into one App. found in 7 reviews
Needs humble bundle support. found in 6 reviews
I like it but please raise level cap. found in 4 reviews
It says to install latest version but I've already installed. found in 99 reviews
It wont run unless i update google play services. found in 10 reviews
Let's have the option to add friends through our contact list. found in 15 reviews
Give me the option to remove games I don't play anymore. found in 6 reviews
I don't want to share my Google plus info with games. found in 24 reviews
I want to uninstall this preinstalled but it's not working. found in 86 reviews
Screw you Google for requiring a Google plus account to leave reviews. found in 24 reviews
Google play service has stopped working. found in 27 reviews
the message Google play store had stopped appears every time. found in 247 reviews
Force closes immediately on my 2013 Nexus 7. found in 30 reviews
Keeps telling me i need to install latest version. found in 99 reviews
Update removed save game data. found in 44 reviews
No option to uninstall and save memory space for something useful. found in 86 reviews
Keeps disconecting to COC it keeps saying you to install the latest version. found in 23 reviews
It said im level 4 but it shows im level 2. found in 37 reviews
but still showing that update to latest version for using this app. found in 23 reviews
Showing no Internet connection even if an active wifi is available. found in 32 reviews
Can't get my clash of clans village on my new phone. found in 209 reviews
This apps very useless because cannot reset game progress. found in 29 reviews
Wish it just showed your installed games by default. found in 30 reviews
This version is unable to login to my Clash Of Clan Village. found in 35 reviews
If you are Android owner,you now can download Games for free from Google Play. The application is designed for use in English language. It weighs in at only 10MB to download. It is highly advisable to have the latest app version installed so that you don`t miss out on the fresh new features and improvements. The current app version 1.1.04 has been released on 2014-11-25. For ensuring consistency with the device you should take into account the following app compatibility information: 2.2 and up
More Info: Find more info about Games in Google Inc.`s Official Website : http://www.google.com/mobile/android/

Google Play Games app is the easiest way for you to discover new games, track achievements and scores, and play with friends around the world. It brings all your gaming on Google Play together in ... 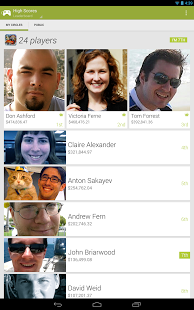 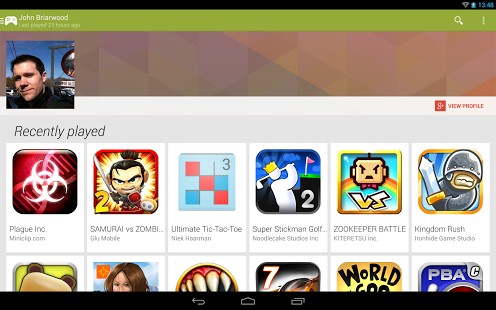 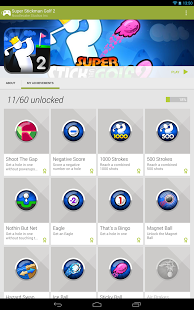 This app is popular with:
gamersscouts